skip to main | skip to sidebar

Our whole family came together, at our house, to celebrate Christmas! It was wall-to-wall people when it came to sleeping. Chris and Kelsey had the guest room, with beds; Clara and Robert were on inflatable mattresses on my office floor; and Tim was on another inflatable mattress on Dan's office floor! And let's not forget the four-legged family member, Thor, who slept in his crate in the living room. It was crowded, and everyone had to schedule turns for the bathroom, but those are the kinds of Christmases that make great memories.

The comings and goings were staggered throughout Christmas week. Tim, who drove all the way from Albuquerque, was the first to arrive, on Wednesday the 22nd. (Thank you, Tim, for making such a grand effort to be with us this Christmas!) The next day Chris and Thor arrived. This was Thor's first visit to our house, and he settled in quite well. He really enjoyed his outdoor time in our backyard. 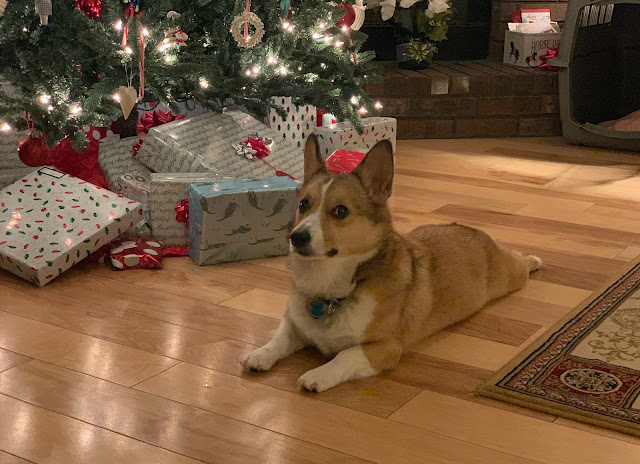 Robert's gift from his parents was beyond his expectations. He got a Nintendo "Switch," and some games to play on it. He had dreamed of owning one, but he confided in me that he never really expected to get it. He was overjoyed. 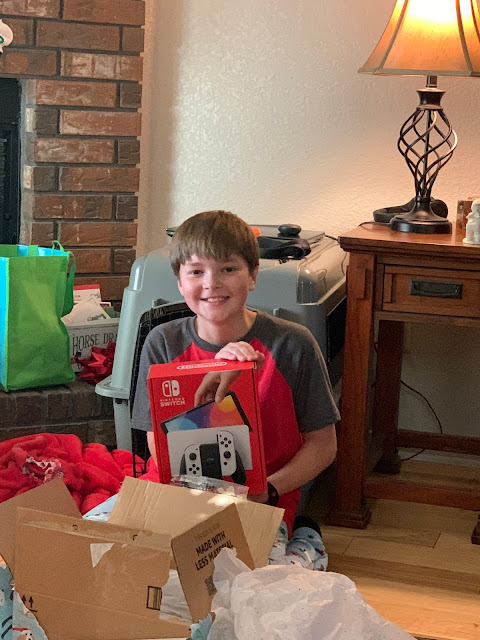 Robert's other Grandma "Bia" gave him a YARD of Twix!!! Oh my! 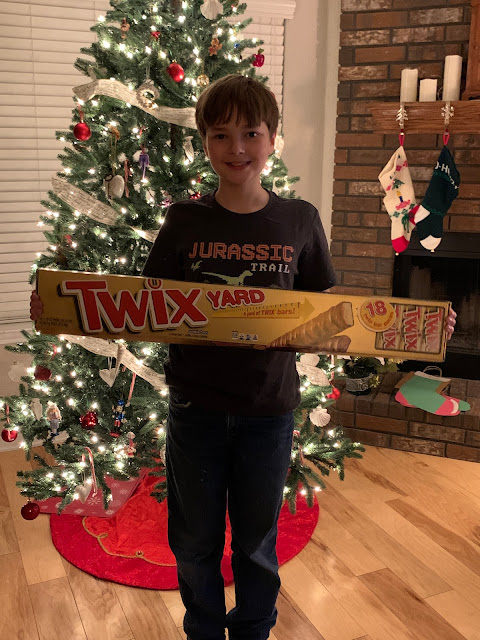 Clara, however, stole the show with her reaction to her parents' gift - tickets to the Broadway show, Hamilton, which is coming to Houston. She is in love with the story, and especially with the music, of this spectacle. She has tickets enough to invite two friends to come along, and for Kelsey, who will chaperone the girls. Clara's reaction to this amazing gift ended in tears of joy. 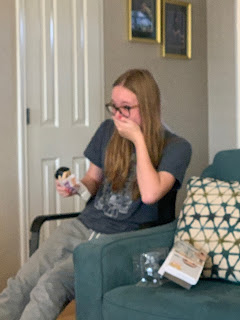 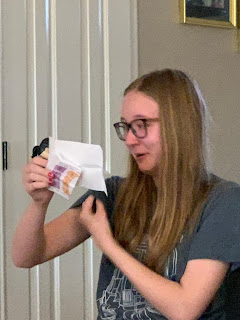 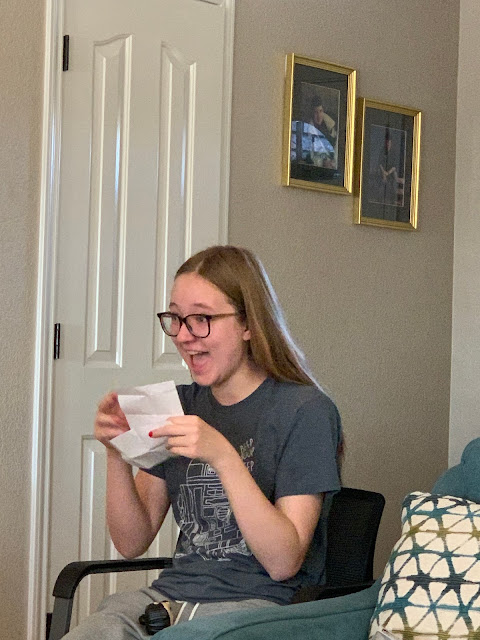 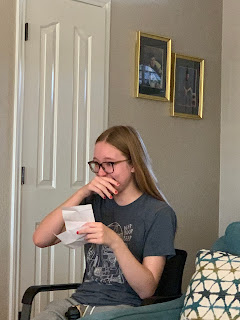 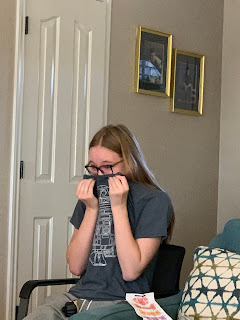 Clara and Chris provided the great entertainment on Sunday afternoon. They did a lot of planning, shopping and artistic designing to prepare for their version of the "Taskmaster" TV game show. Chris took on the persona of Greg Davies (The Taskmaster), and Clara did an outstanding job of playing the Alex Horne character. The rest of us - the contestants - met the challenges they presented with vigor and laughter. Great fun! And I don't mind memorializing here that I was the winner of the game! I hope we'll have another round of Taskmaster challenges next year. 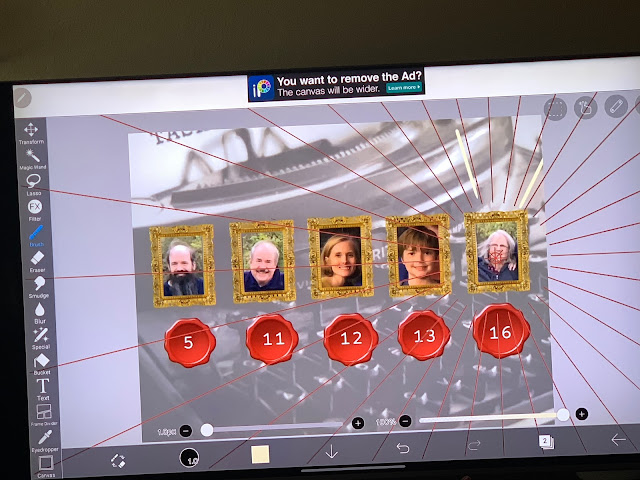 In the same randomness that people arrived, so did they leave. Tim left Monday morning, the 27th; Chris, Clara and Thor left Tuesday around noon; and Kelsey and Robert stayed on another day, leaving on Wednesday. It was nice, for Grandma and Grandpa's sake, that they didn't all leave at once. I won't lie: I was pretty worn out by Wednesday, but I wouldn't have had it any other way. It was a glorious Christmas!

Posted by Linda Judd at 9:25 PM No comments:

Saturday Dan and I went to the Sons of the Republic of Texas/Daughters of the Republic of Texas (SRT/DRT) Christmas luncheon. It was held at the Oscar Store. Oscar was a little Czech village, founded in the late nineteenth century. In 1896, its heyday, it had a population of 115 and had a cotton gin, a hotel, a general store, a blacksmith and a barber. All that remains is the Oscar Store, which is actually a restaurant now. It is a reconstruction of the original Oscar Store, which burned to the ground in 2005. It's one of our favorite places to go for a hearty Texas dinner. The heartiness of the banquet lunch we were served yesterday was no exception - steak, baked potato, green beans, hot roll and, for dessert, peach cobbler! It was more than I could eat for a noon meal, so I asked for a take-out container and brought home enough for another meal. 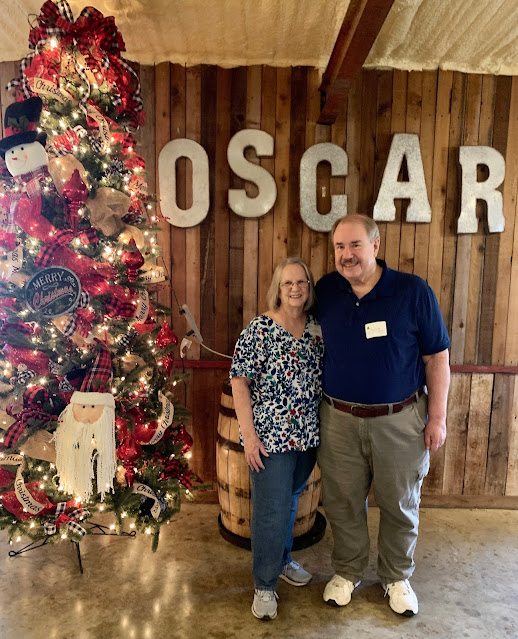 Then, on Saturday evening, we went, along with our friends Kay and Andy, to the Temple Symphony Holiday Concert, which always the kicks-off the holiday season for us. As always it was wonderful. This was the first time the whole orchestra has gathered for a performance in two years, due to COVID precautions. So it was especially joyous! 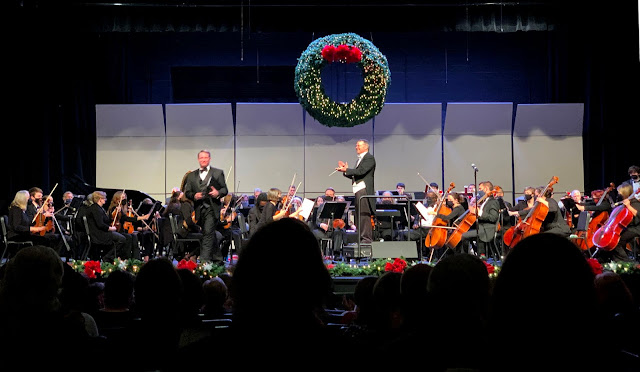 So now, our tree is decorated, the living room is aglow with sparkly lights, I've done my shopping, and made and mailed my Christmas cards. We will be attending a few other celebrations before Christmas Day, but we are already well into the Christmas spirit. 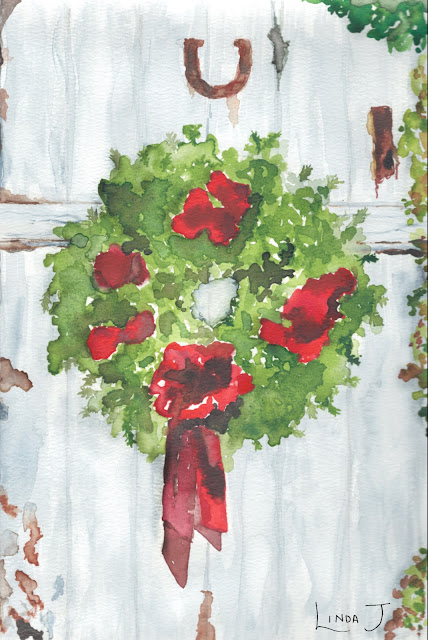 Thanksgiving 2021 marks the second Thanksgiving with COVID. Our family has coped with this pandemic in different ways. Dan and I spent months in fairly strict isolation. When the vaccine became available, we felt, due to our age and other health issues, that it was the right thing for us, so we are fully vaccinated and have had the booster shot. Though we realize it's not 100%-certain protection, it did give us some confidence to gather, once again, with friends and family. Tim spent months working from home while the UNM campus was closed, and he, also, has been vaccinated and is now working back on campus. Chris, Kelsey and the grands opted not to be vaccinated. They all did come down with COVID, but recovered without too many problems. All of that is to say we ARE thankful for the various ways God has kept us safe these past two years.

And so, we celebrated Thanksgiving Day together as a family last week. Tim drove from Albuquerque to be with us, which made our family circle complete. Chris, Kelsey and the grands set up camp (a fun Thanksgiving tradition), with their motorhome, at a campground in San Antonio. Tim, Dan and I spent Wednesday and Thursday nights in a hotel near the Riverwalk, but our daytime hours were at the campground with the others.

Robert's 12th birthday was right before Thanksgiving, so on Wednesday evening we gathered at the Hard Rock Cafe on the Riverwalk for a celebratory dinner. It was a lot of fun, and the Riverwalk, decorated for the holidays, was beautiful. 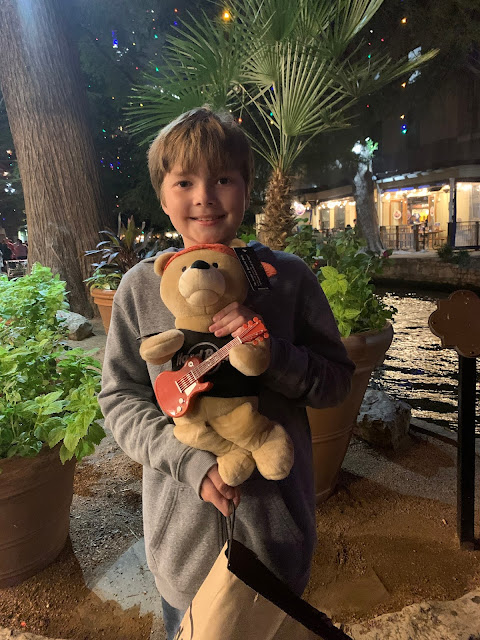 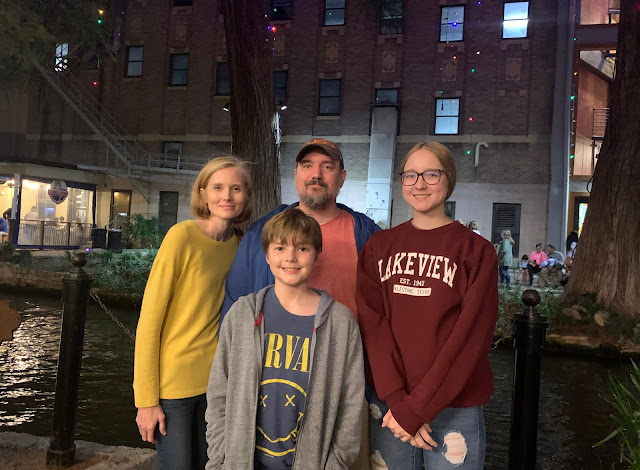 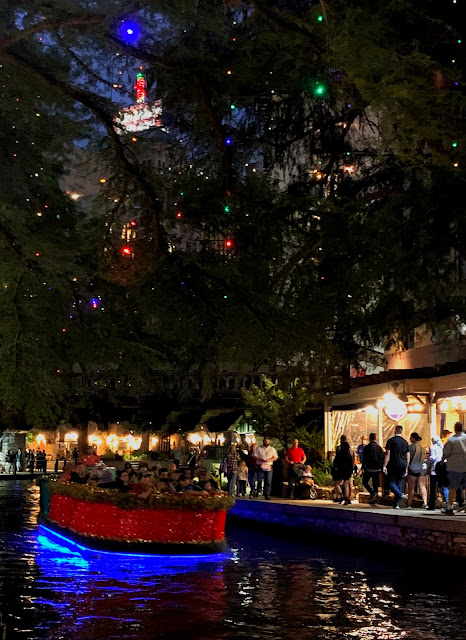 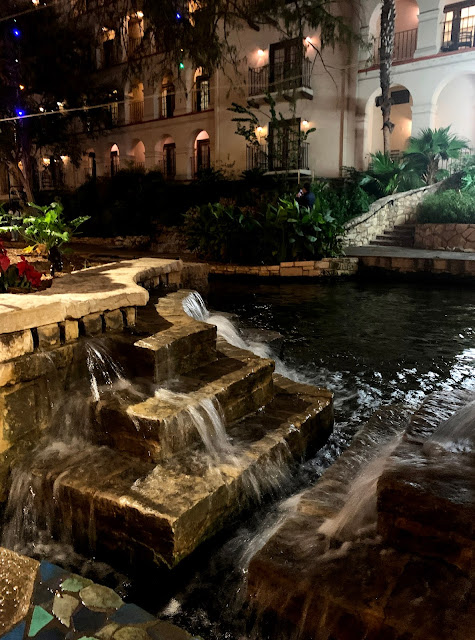 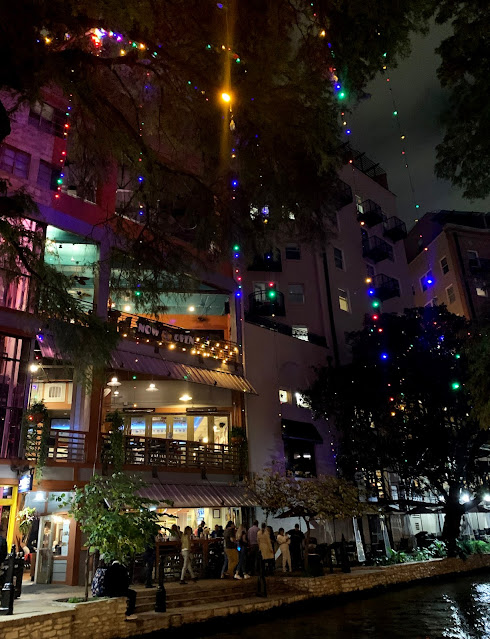 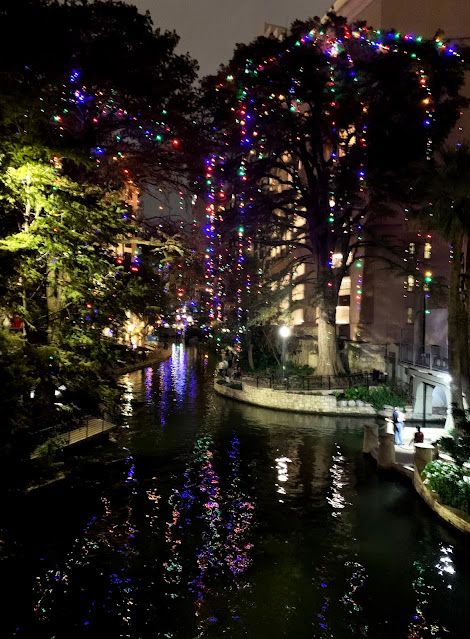 The next day - Thanksgiving Day - we gathered at the motorhome. Wednesday's weather had been warm and pleasant, but on Thursday we had a lot of rain early in the morning. The rest of the day was damp, windy and a bit chilly. Robert had wanted me to go fishing with him, but the weather wasn't right for that. Instead we stayed indoors all day, watching the Macy's Thanksgiving Parade on TV, playing a game or two, visiting and enjoying each other's company. Kelsey and Chris prepared a wonderful holiday meal, and afterward we went outside and took a few family pictures. 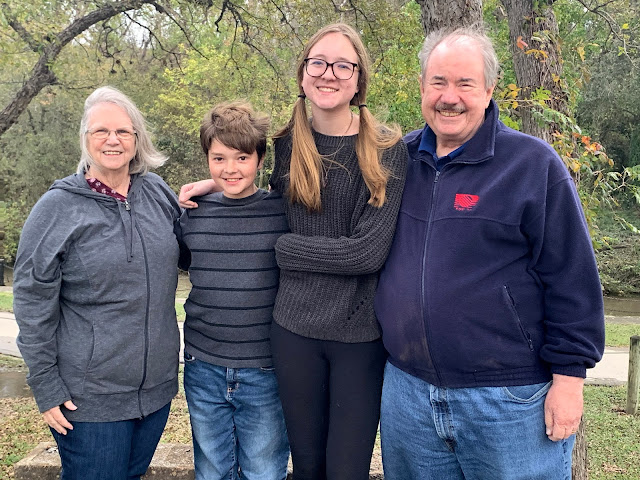 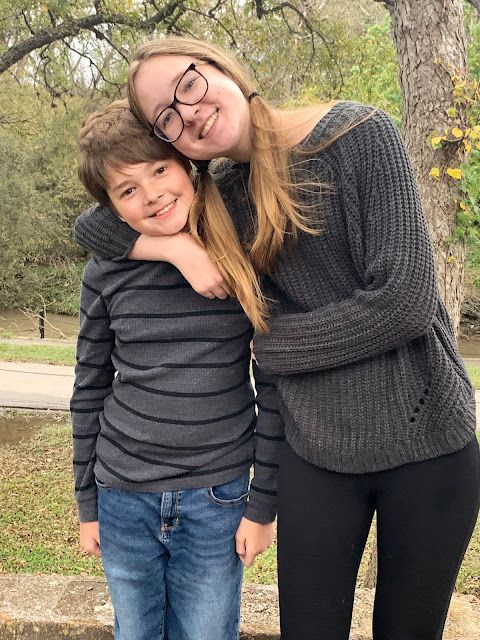 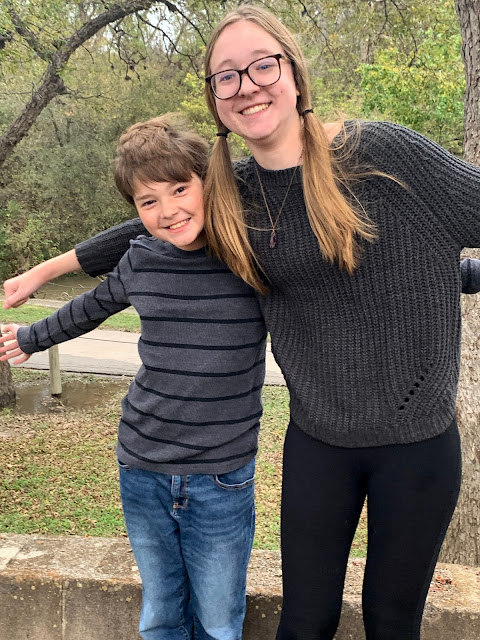 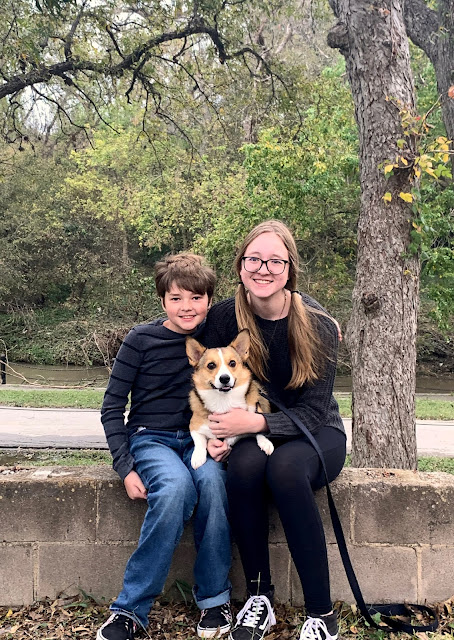 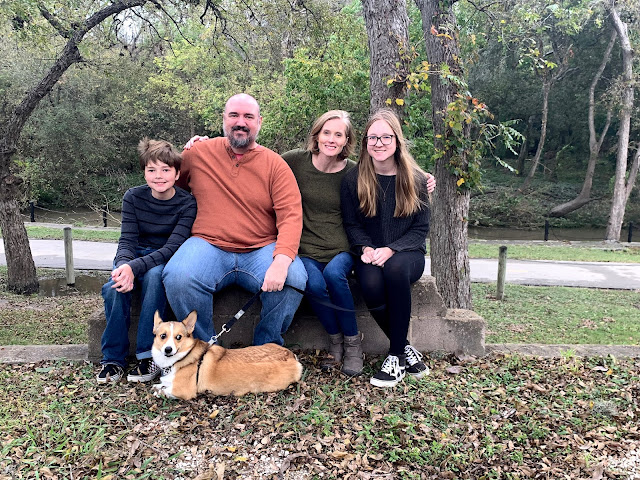 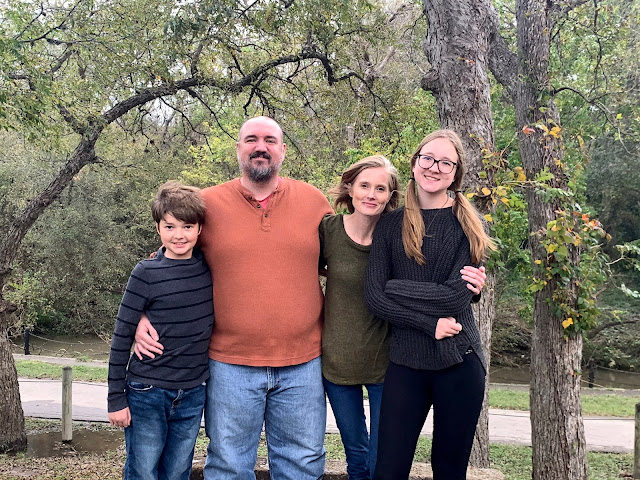 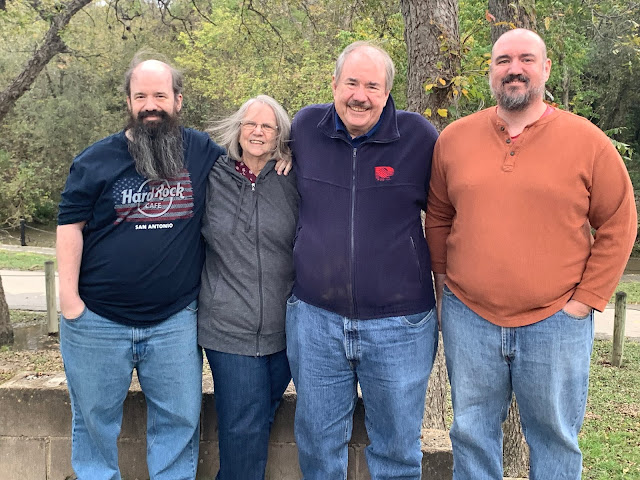 Friday morning Tim, Dan and I headed back home, to Temple. Tim was able to rest up that afternoon and evening, and then started home on Saturday morning. He arrived in Albuquerque at around 7:45 pm (MST), which was 8:45 pm for us. I always breathe a little easier once he texts me that he's made it home safely.

It was a great Thanksgiving - one of the best, for me. Just having all our loved ones with us was such a blessing.

Posted by Linda Judd at 9:51 AM No comments:

Robert and the New School Year

I should have posted this three weeks ago, but, as they say, better late than never!

Robert recovered from COVID just in time to start school on August 26. It was a big day. Last school year he was home-schooled, because of COVID. I can't say enough about what a marvelous job Kelsey did, keeping him interested and on-or-above grade level. From my perspective, I think it was the most productive school year he's ever had.

The plan all along, however, was to return to in-person schooling when the pandemic allowed it. But a change was in order - a move from Robert's old school, Mayde Creek, to a private school that would provide a more challenging and motivating environment. So, Robert began sixth grade this year at Memorial Private School. Here is his first-day-of-school picture. 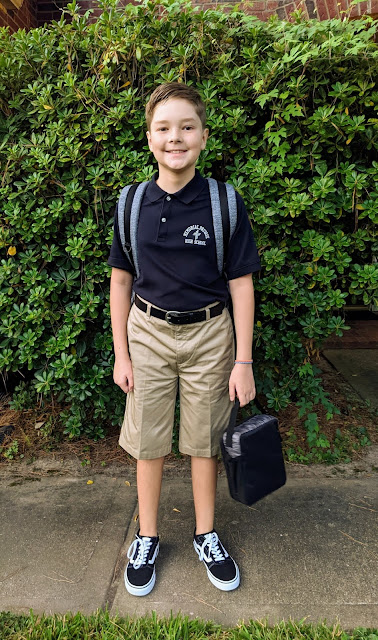 Everything is new and different. One obvious difference, as seen in this photo, is that the students at Memorial Private wear uniforms. The school identifies itself as a "strong values, low stress, high outcomes" learning environment. We're hoping that it turns out to be a perfect fit for Robert. So far, he seems to be happy there.

Dan, Robert and I continue to meet together once a week, via Skype, for what I call "Grandma's Bookclub." During our time together we discuss a portion of the book that we are all reading. I've found this to be such a joy! We've talked about so many different topics that probably would never have come up if we hadn't been reading about them. So far we've read the following books: Artemis Fowl, by Eoin Colfer; Where the Red Fern Grows, by Wilson Rawls; The Mysterious Benedict Society, by Trenton Lee Stewart; The Mysterious Benedict Society and the Perilous Journey, by Trenton Lee Stewart and Diane Sudyka; Pax, by Sara Pennypacker and Jon Klassen; and Allies, by Alan Gratz. For this first month of the school year, we are taking a break, still talking on Skype once a week, but not reading a new book. However, beginning in November we will resume our reading. We haven't yet selected our next book.

Posted by Linda Judd at 8:13 AM No comments: 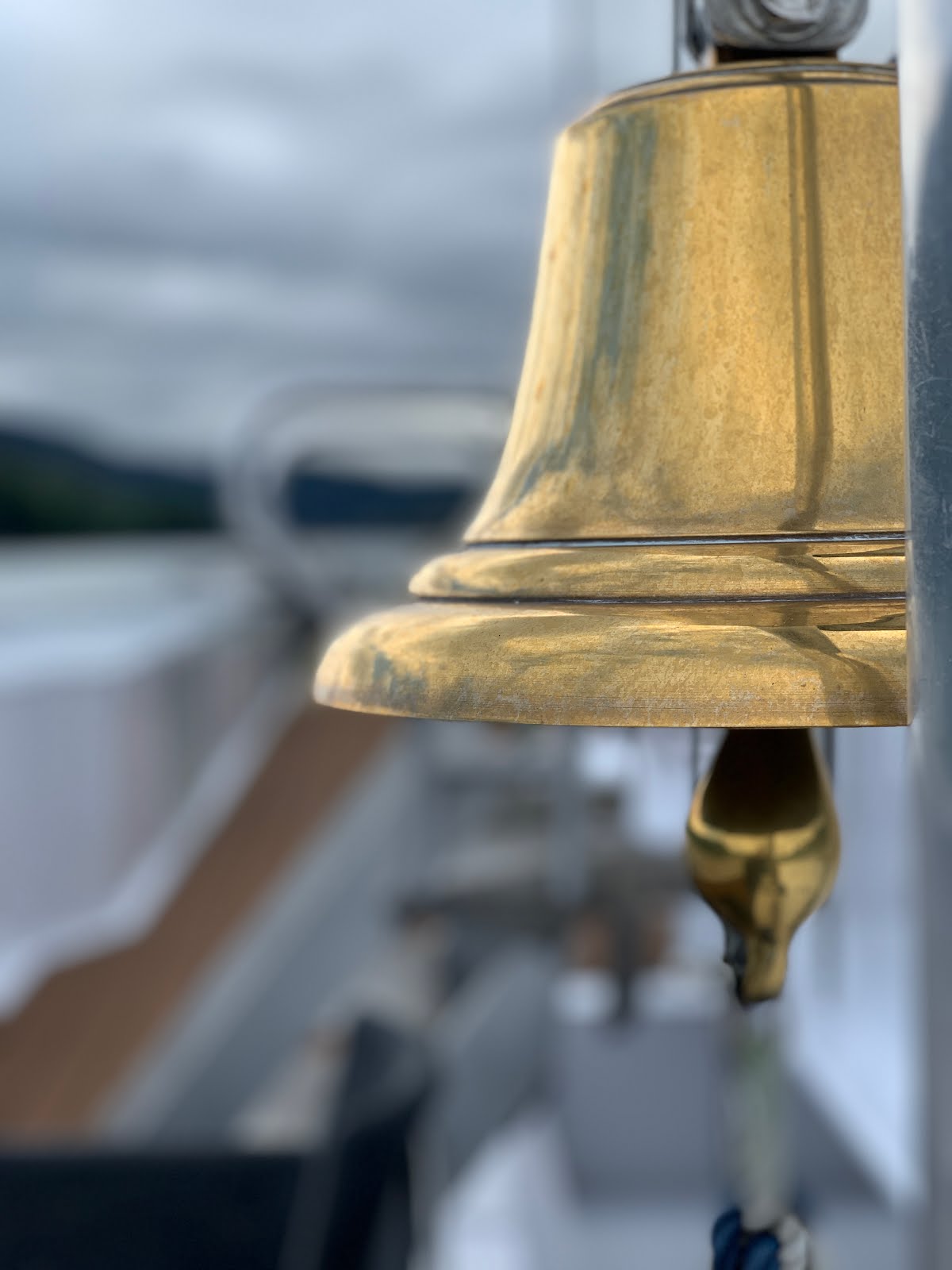 CLICK PICTURE ABOVE TO BEGIN THE EUROPEAN RIVER CRUISE 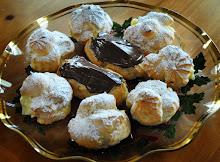 CLICK PICTURE ABOVE TO SEE MY DARING BAKER CHALLENGES 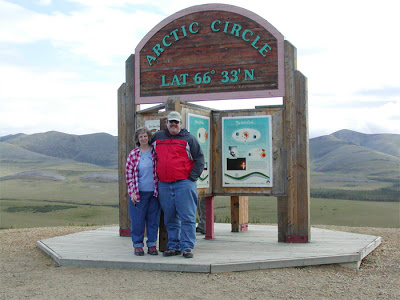 CLICK PICTURE ABOVE TO BEGIN THE TRIP TO INUVIK